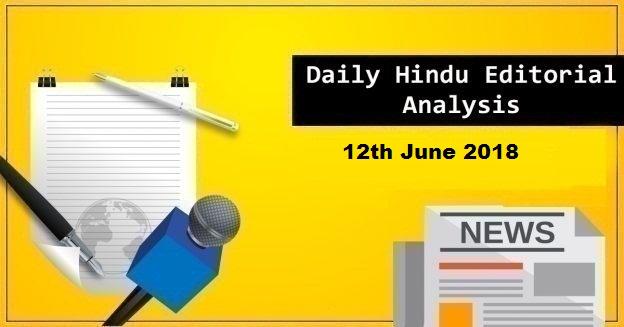 What is Artificial Intelligence (AI)? How it will help to solve the problem in different sector of Economy?

 NITI Aayog has published an ambitious discussion paper on kick starting the artificial intelligence (AI) ecosystem in India.
 AI is the use of computers to mimic human cognitive processes for decision-making.
 Artificial intelligence (AI)- is intelligence demonstrated by machines, in contrast to the natural
intelligence displayed by humans and other animals
 To realise India‟s potential in the field, a strong buy-in from policymakers is needed
 The paper talks of powering five sectors agriculture, education, health care,
smart cities/infrastructure and transport — with AI.
 It highlights the potential for India to become an AI „garage‟, or solutions provider,
for 40% of the world.

 Several countries have similar ambitions… The U.S., Japan and China have published their AI
strategy documents and, importantly, put their money where their aspirations are.
 China, for example, plans to hand out million dollars in subsidies to AI firms, as well as to run
a five-year university programme for 500 teachers and 5,000 students.
 The NITI Aayog does not talk about how India‟s ambitions will be funded, but proposes an
institutional structure to get things going.
 This structure includes a network of basic and applied research institutions, and a CERN-like
multinational laboratory that would focus on global AI challenges.
 India hardly has any AI expertise today- The paper estimates that it has around 50
top-notch AI researchers, concentrated in elite institutions like the IITs.

 India, with its acute shortage of specialist doctors in rural areas, could benefit
greatly from such a tool.
 Importance of quality data in building smart AI tools; India lacks this in sectors
such as agriculture and health.
 Where data exist, this is poorly annotated, making it unusable by AI systems.
 Despite these formidable challenges, the scope of NITI Aayog‟s paper must
be lauded
 Which will demand a strong buy in from policymakers and substantial funds.
 The coming years will show if the country can manage this.

 India China relations were portrayed in complex terms as having “many layers”
 Mr. Modi urged both the U.S. and China to manage their rivalry and prevent their “normal”
competition from descending into conflict.
 India‟s foreign policy is likely to be driven by a dual attention to the balance of power and
order building in the continental and maritime environment around the subcontinent.

To the brink and back

 After being close to military action last year, how the U.S. and North Korea agreed to talks
 Less than a year ago, North Korea scored a „nuclear double‟.
 In July 2017, it launched two intercontinental ballistic missiles, the first capable of reaching
Alaska, and the second, the Hwasong-14, capable of reaching California.
 North Korea would up the ante further by firing its missiles closer to Guam
 U.S. has already felt deterred from taking pre-emptive military action.
 When North Korea pulled out of the Non-Proliferation Treaty in 2003 and intensified its
nuclear program, the UN imposed sanctions.
 But the North Korean regime continued to conduct missile and nuclear weapon tests,
provoking the UN and the U.S- North Korean economy- China

 Page-1- In Chennai, the hearts beat for foreigners
 International patients get priority in cadaver transplants, bypassing long list of Indians
 Three of four hearts harvested were given to foreigners.

 Page-1- We‟ll help in locating Nirav Modi, says U.K.
 CBI seeks Interpol notice against diamond merchant
 British authorities have confirmed to Indian officials
that fugitive diamond merchant Nirav Modi, accused
of bank fraud worth ₹1•,000
crore, is in the U.K. and assured them of cooperation
in locating him. The assertion comes in the wake of a
Financial Times report that Mr. Modi has sought asylum in the U.K.

 ‘Unique guarantees’ to North Korea from U.S.
 In return for giving up nuclear arsenal
 ‘Include Nipah in revised MBBS syllabus’
 Pradhan Mantri Matru Vandana Yojana (PMMVY), the government has finally made
some headway and provided cash incentives to nearly 23.6 lakh beneficiaries out of an
estimated 51.6 lakh a year.
 13 dead in ‘IS attack’ on Afghan Ministry
 ‘SCO can be a vehicle to better India-Pak. ties’
 U.S. President’s broadsides against G7 allies continue